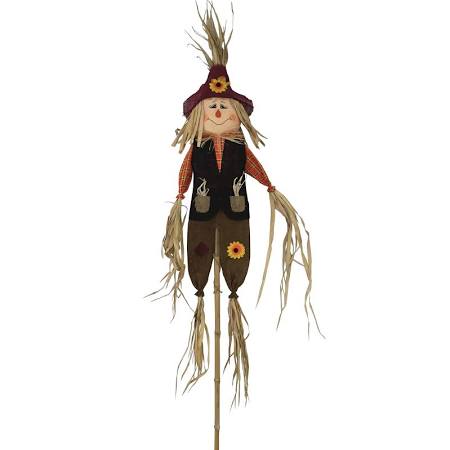 Fall is finally here and for me that means getting out my fall decorations. I love to decorate my house for different holidays and fall is one of my favorite times to decorate, second only to Christmas.  However, over the past 3 years, there has been something missing from my decor.

At the end of my driveway is a lamppost which I always cover with a colorful fall garland made up of orange, red, and yellow mums as well as colorful leaves.  For years, in front of the lamppost have stood 5 scarecrows…one for each member of our family.

The scarecrow tradition started many years ago when my husband and I drove to Louisiana to go on a cruise.  We stopped at a mall along the way that had this huge home store.  There we found this scarecrow that we just loved.  We shoved him in the back of our car packed with all our luggage and there he stayed until we arrived home from our trip.  We joked about how we drove all that way and came home with something we could have bought at a local store.  Anyway, we decided to name him and picked the name Lieutenant Dan.  And yes, for those of you Forrest Gump fans out there, he was named after that Lt. Dan.  You see we were always ones to quote lines from movies to each other and at that time, we had watched Forrest Gump more times than we could say and often quoted lines from it to each other.  One of our favorite lines involved Forrest offering Lt. Dan some ice cream as he lay in the hospital bed after losing both of his legs.  And so, our scarecrow became Lt. Dan.  When we arrived home, he graced the front yard of our home through-out the fall season.  When we moved to a new home Lt. Dan came too and again we found the perfect place for him out at the lamppost.  By this time, we had 3 kids as well, so we decided that Lt. Dan needed a family, so we found him a “wife” and 3 small scarecrows one to represent each of our kids.

Now over the years, the weather took its toll on Lt. Dan and we had to replace him, but we never got rid of him. We retired him to our shed.

The year my husband left, the scarecrows were already up and I left them that way, but as fall rolled around the next year, I didn’t know what to do.  It seemed too painful to put them all up, and not any better to put just 4 of them up.  To me putting just 4 of them up felt like I was announcing to the world that I was a single-mom trying to get through the holidays on my own.  So I just didn’t bother to put any up.  Last year, the feeling was pretty much the same.  This year, as I went to the shed for something and saw Lt. Dan standing there, I thought back to all those years ago when we bought him.  I realized that I again this year, I couldn’t put the scarecrows out.  It was just too sad.

As I thought about this, I realized that no matter how many years go by there will probably always be some things that are just too sad to do.  And you know what? That’s ok.

Sometimes, growing means realizing that some traditions just need to be changed.  I realized that this year.  I realized that it was time to say goodbye to Lt. Dan and stop torturing myself each year with deciding whether or not I could handle putting up the scarecrows.  So although I haven’t gotten to the point of throwing Lt. Dan away, for now, I can say goodbye to him and the scarecrow tradition and move forward.