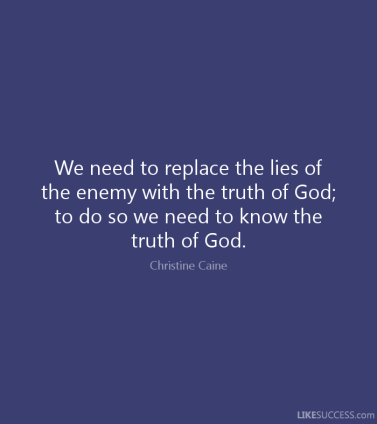 I love when God shows us something that goes right in line with some things that have been going on in our lives.  The other day as I was reading my devotional, the passage was in Luke chapter 11 vs 24-26.  Jesus was speaking to a crowd and told this story….

“When the unclean spirit has gone out of a person, it passes through waterless places seeking rest, and finding none it says, ‘I will return to my house from which I came.’  And when it comes, it finds the house swept and put in order. Then it goes and brings seven other spirits more evil than itself, and they enter and dwell there. And the last state of that person is worse than the first.”  Luke 11:24-26

As I read the passage it got me thinking about some things that I had been talking with my daughter about.  She has been having some trouble lately with fear and constant negative thoughts and patterns.  I told her the best thing to do is to replace the bad thoughts with good ones, the bad patterns with better ones.  Replace every lie that the enemy tries to tell you with a truth from God.  For example….

Lie : “I have done too many bad things, God isn’t going to love me anymore”
Truth: God loved you so much he sent his son to die for you(John 3:16) Nothing, Nothing, Nothing can separate you from his love(Romans 8:31-39)

Lie: “I can’t do this, it is impossible”
Truth: You can do all things through the strength that Jesus gives(Philippians 4:13) and NOTHING is impossible or too difficult for God.(Matthew 19:26, Jeremiah 32:27)

Those are just a couple of examples but you can fill in the blanks for yourself.  Think of the lies you believe about yourself and then find the truth in God’s word.

You see, if we just try to remove the thoughts and don’t replace them with truth, we leave ourselves open to more lies. We need the power that comes from the word of God and the strength that Jesus gives to get rid of the fear and lies.

It is just like the passage above.  The individual’s “house” was swept and put in order but it was empty.  It needed to be filled and the only one who can do that kind of filling is Jesus.  If we don’t put truth into ourselves, if we don’t fill ourselves up with Jesus, and with the promises of God’s word then we leave ourselves vulnerable to lies and evil.  The passage above ends by saying the person was in a worse state than they were before.  To me that passage is so very sad. Here they had the chance to have a new life, to be filled with the peace and life of Jesus but instead, they end up filled with more evil than before.

When you find yourself in a place where fear is ruling, where you are listening more to the lies of the enemy than to the truth of God, don’t just remove those bad thoughts, replace them with God’s truth, replace the bad with the best. Get into God’s word and learn what He has to say about you. Don’t just remove, replace!