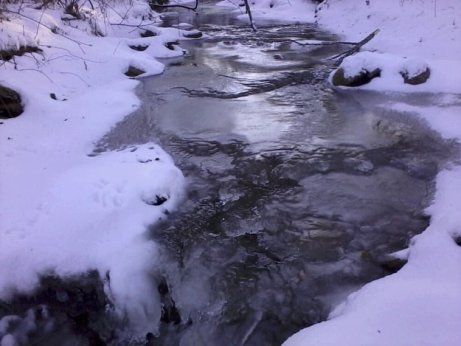 Behind my house is a small stream. In the winter time when the weather gets very cold it freezes and allows us to walk on the surface, play ice hockey, or just slide around on the ice.

Recently, we had a huge January thaw.  The weather turned unseasonable warm for a couple of days.  Since we had a lot of snow that melted in those 2 days, our tiny stream turned into more of a rushing river.  Then, as quickly as the warm weather came, the frigid temps returned and the stream refroze very quickly.

However, the other day when I was hiking and went down to the stream, although on the surface everything was hard and very icy, beneath it I could hear rushing water. I followed the sound and found a place where the ice was not as thick and I was able to break it and beneath, was a rushing current pouring over the rocks.

As I sat there watching the water through the hole I had made in the ice, it reminded me of our lives.  Sometimes, things around us look frozen in ice…like nothing is changing and our circumstances look grim.  However, if we take the time to listen to the Holy Spirit, we can hear the “water” rushing.  If we ask God to help us look beneath the surface, we find that the rushing power of His presence is at work all around us.

We have just finished 2 weeks of fasting and prayer at my church.  During that time, God continually kept bringing me back to one theme:  Keep your eyes fixed on Me. Stop looking at what is going on around you and look at me.  Even the things that look like failures, don’t look at them that way…look at me…I am at work, I have a plan, LOOK AT ME!

As a friend of mine was praying with me, she brought up the story of Peter walking on the water….throughout the week, other people also referenced that story from Matthew 14.

In case you aren’t familiar…

“Immediately he made the disciples get into the boat and go before him to the other side, while he dismissed the crowds. And after he had dismissed the crowds, he went up on the mountain by himself to pray. When evening came, he was there alone, but the boat by this time was a long way[ from the land, beaten by the waves, for the wind was against them. And in the fourth watch of the night he came to them, walking on the sea.  But when the disciples saw him walking on the sea, they were terrified, and said, “It is a ghost!” and they cried out in fear.  But immediately Jesus spoke to them, saying, “Take heart; it is I. Do not be afraid.”

And Peter answered him, “Lord, if it is you, command me to come to you on the water.” He said, “Come.” So Peter got out of the boat and walked on the water and came to Jesus. But when he saw the wind  he was afraid, and beginning to sink he cried out, “Lord, save me.” Jesus immediately reached out his hand and took hold of him, saying to him, “O you of little faith, why did you doubt?” And when they got into the boat, the wind ceased. And those in the boat worshiped him, saying, “Truly you are the Son of God.”

Peter was able to walk on the storm while his eyes were on Jesus.  However, as soon as Peter looked at the storm raging around him he fell in.  But that isn’t the end of the story.  Even though he was looking at the storm, Jesus saved him…and then it tells us when they got to the boat and got in the storm stopped.  That means that Peter must have walked the rest of the way back to the boat on the water with Jesus.

No matter how things look on the surface, His power is always running strong beneath, and even when we fail to keep our eyes on Him, even when we allow fear to overtake us, He doesn’t leave us there, he picks us up and helps us.  Because He NEVER leaves us.